One of the fastest growing sectors in Indian agriculture is the poultry industry. The demand for animal products is also increasing day by day with the increasing human population and income sources. Poultry industry is one of the major industries that are supporting the vast population of the world. To meet the meat demand of increasing human population no doubt genetic makeup, feeding and managemental practices, disease prevention etc. are the main factors but major concern is to reduce feed cost for optimal economic returns because the feed constitutes approximately 70% of the total production cost. So, there is an urgent need to explore the various agro-industrial waste and other unconventional feed resources for an economically viable poultry production (Bhatt and Sharma,2001).There is need to utilize locally available feed ingredients because of the scarcity of both maize and soybean at reasonable price, India is one of the largest producers of rice in world producing approximately 112.91 million tons of rice and Punjab produces 11.85 million tons of rice in 2017-18 (Govt. of India, 2018). So, a lot of by-products are available from rice processing industry. Among the various by-products of rice, rice distillers dried grains with soluble (RDDGS) is a protein by-product that have the potential to be incorporated in livestock and poultry feed.The major co-product of biofuel ethanol production is distillers dried grains with solubles (DDGS), which is a dried mixture of the solid and condensed liquid fermentation residues (Rausch and Belyea, 2006). Commonly used ingredients for fermentation during bioethanol production are corn, wheat, barley and sorghum. Nowadays due to relative lower price, higher production and easy availability, rice is used as substrate for bioethanol production there by leading to increased availability of by-product rice distillers dried grains with (RDDGS). It contains 45% crude protein and has metabolizable energy around 3300 kcal/kg (IFBAGRO, 2018). With expansion of ethanol plants, the supply of RDDGS is increasing rapidly and poultry nutritionists are making increasing use of it in their diets. Increased protein, fat and digestible phosphorus content can make DDGS an attractive, cost-competitive ingredient for least-cost poultry feed formulations. According to ICAR annual report, addition of rice DDGS up to 10% level did not exert any adverse effect on growth and carcass traits in broiler (ICAR- CARI, annual report, 2014-15).Dinani et al. (2019) reported that RDDGS can be safely incorporated upto 12.5% in broiler diets. Thein et al. (2020) reported that in grower diet 20% RDDG can be included without any detrimental effect on the growth performances of broilers.As most of the research work is done on corn, wheat, barley and sorghum DDGS therefore, only a few researches are available in literature regarding evaluation of RDDGS in poultry. Therefore, this study was carried out to evaluate the supplementary effects of different levels of RDDGS with or without enzyme on growth performance and nutrient digestibility of broilers.Material and Methods.

The study was carried out at Department of Animal NutVeterinaryand Animal Sciences University, Ludhiana, India (30056′N, 75052′ E, 247 m above sea level). RDDGS was procured from prodigy foods,Zirakpur, Punjab. The product was then analyzed for dry matter, crude protein, ether extract, crude fibre, total ash,phosphorous estimated by AOAC. (2000) and calcium as per the modified by Talapatra et al. (1940).

42 days feeding trial along with metabolic trial was conducted separately in meat type birds to determine the effect of feeding RDDGS in broiler performance. The growth studies in the feeding trial were divided into 3 phases i.e.,starter (1-14 days), grower (15-21 days) and finisher (22-35 days) phase as per the recommendation of ICAR. (2013)given in Table 1. In this growth study, 240 sexed chicks were weighed individually at 1 day of age and distributedrandomly into 6 treatments having total 10 birds per treatment with 4 replicates. The chicks of all experimental groups were weighed individually at weekly intervals. Average body weights and body weight gains for weekly interval, starter (1-14 days), grower (14-21 days), finisher phase (22-35 days) and for entire experimental periods (1-35 days) were then calculated. Feed Conversion Ratio (FCR) was calculated as a ratio of grams of average feed consumed per grams of average body weight gain per bird. The efficiency of protein utilization is expressed as protein efficiency ratio (PER) and was calculated as grams of body weight gain per gram of protein consumed on phase basis. The efficiency of energy utilization is expressed as calorie efficiency ratio (CER) and was calculated as body weight gain per kilo calories consumed. A metabolic trial of 7 days with 4 days adaptation period and followed by 3 days of collection period was conducted after 35 days of growth trial. Faeces were collected for three consecutive days of each replicate were mixed properly. For three days, total collection method was used for faeces. 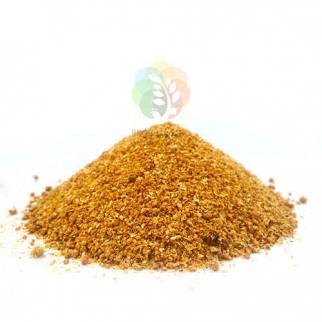